BMW has applied for a patent on a new electric turbocharger, and industry enthusiasts speculate that the technology is destined for use in the next version of the M3. This new design appears to be the most advanced solution yet to the issue of turbocharger lag at higher RPMs. BMW has been working on this performance issue ever since it began to regularly employ turbochargers in factory power plants.

The patent application for the new technology was filed in Germany. The BMW engineers have created a new kind of turbo charger which uses a small electric motor which synchronizes with a more conventional turbo charger. This design allows the electric motor to power the turbo’s turbine as the device shifts from idle to load. In the process, turbo lag is dramatically reduced.

It is speculated that the patent could be put to market use right away in the next gen M3, which is expected to hit the market sometime in 2014. The new technology represents a big leap forward in addressing turbo lag, which is defined as the time it takes for a turbo charger to spool up.

The electric turbo boosts fuel efficiency by keeping the engine running at its optimal operating rate, while also boosting performance by reducing the turbo lag. While BMW has not announced specific production plans for the new technology yet, it is likely that it will show up in the high performance models first as a way of defraying the cost of development. However, since it is a fuel saving technology it’s likely that eventually it will show up in lower end models as well.

Automobile enthusiasts are excited over the new patent application, as it represents the first real solution to the problem of turbo lag which has plagued turbo chargers from the start. The specifics of the patent application are quite technical, but a general summary is that the system utilizes a series of clutches along with an electric motor to significantly minimize turbo lag.

Each time the driver pushes the accelerator, the electric turbo charger motor will spool up the turbo which will provide more optimal performance. When the electric motor is not needed, it will switch over to function like an alternator and recharge its own battery. Simultaneously, the motor controls the turbo speed at an optimal level so the need for a wastegate is eliminated.

Sony has been awarded a patent for a new biometric game controller design. The controller has been designed to work with the company’s Playstation systems and would actually be able to sense the biometrics of a player such as perspiration, heart beat and muscle movements. These new controllers would look just like standard controllers, and Sony has not released any details of specific uses for the new devices.

This has led to wide ranging speculation among experts in the gaming industry over what they will be used for. Some have suggested that they would be used to detect player stress levels adjust the level of game play accordingly to suit the player’s mood. A good example would be a shooter game in which the player’s character is holding a weapon. As the player becomes more relaxed, the biometric controller would sense this and their character would hold the weapon with a steadier grip.

The new Sony patent is the latest indication that the video game industry is moving in the direction of biometrics, but gamers will have to wait a while for these devices to actually hit the market according to industry insiders. The announcement by Nintendo of their biometric Vitality Sensor caused a lot of buzz, only to disappoint everyone when it was delayed with no release date in sight. The same goes for the Ubisoft Innergy biometric controller design.

It’s no surprise that gamers may be a bit skeptical about the new Sony device, with some wondering whether it will also get cancelled before it’s ever released to the market. The Sony patent covers both biometric controllers for console gaming, and also for hand held systems which will be designed with built in biometric sensors.

The patent gives Sony the potential to get a jump on the market for biometric controllers, especially given the failed attempts of its competitors in the last few years. The Sony device features more advanced technology than the failed Wii Vitality Sensor from Nintendo, which clipped onto the player’s finger to measure biometric data. That project was cancelled due to the inconsistent performance of the device.

The new devices proposed by Sony will measure 3 unique biometric stats, which include galvanic skin resistance, electro muscular data and elector cardio data. All of this data will be transmitted and interpreted by the video game when the user simply holds the controller or hand held system in their hands. 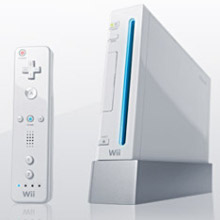 A new patent from Nintendo outlines an innovative accessory that allows the user to use their Wii Remote as a touch pad. The line art from the patent app illustrates an accessory that you slip onto your Wii Remote, along with a device that connects to the Wii as well. The touch pad accessory works by amplifying the LED with mirrors on the remote.

It interprets the resulting signals as positional data each time the user touches the pad. This is certainly an ingenious solution to turn a standard controller into a touch pad, rather than creating an entirely new device. The fact that the company filed the patent application is no guarantee that this accessory will ever hit the market, or when you will be able to buy it in the stores.

The Japanese Nintendo patent application reveals a design that will turn a standard controller into a touch pad by simply sliding the new accessory onto the touch pad. When the user touches the pad it activates an infrared LED light. The beams of light are then amplified by bouncing off a mirror, and used by the controller as positional data.

The device doesn’t alter the operation of the remote so it can still be used as a standard Wii remote if the user chooses by simply not touching the pad. Nintendo has suggested that the accessory can work as a drawing pad or mouse pointer for advanced game activities. However, the standard Wii Remote already has mouse pointer functionality via the sensor bar.

Some people speculate that due to the aging lifespan of the current Wii system, it’s a good possibility that the new technology the patent describes may not hit the market until the arrival of the next generation Wii console, the Wii U. The main controller for the Wii U was revealed at E3 earlier this year, and unlike the standard Wii controller today it is a larger, tablet style touch screen device.

However, this device is also compatible with current Wii remotes. It is speculated that the touch pad accessory will add similar functionality to serve as an upgrade to older Wii remotes for the new system. However, the patent application drawings don’t make it clear whether the device includes a real touch screen or simply a touch sensitive pad. There are other rumors floating around the net that also hint at the new device being intended specifically for the Wii U system only.