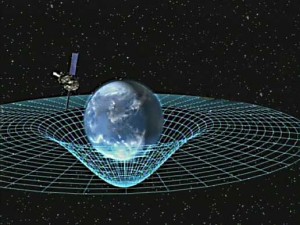 The fine folks at NASA have confirmed two of the predictions formulated from Albert Einstein’s general theory of relativity.  Through the use of ultra-precise gyroscopes housed in a satellite orbiting the earth, scientists have measurable results that indicate both the geodetic effect and frame dragging do occur.  The geodetic effect is the warping of space and time around an object, in this case the earth.  The most simple way to visualize this,  is the bowling ball on a mattress example.  As you look closer to the ball, you will see increased curvature in the mattress.   The effect know as frame dragging takes that same concept and factors in the rotation of the earth.  Imagine a ball floating in honey,  if you  were to rotate the ball you would see the honey begin to swirl around the ball.

To prove these predictions, scientists had to measure their effects within  milliarcseconds, a margin of error about the width of a human hair over 10 miles.  The required precision is exactly why Einstein himself told the scientific community that they should not bother trying to perform laboratory experiments to find the effects.  NASA conducted their tests by using a “start tracker” to point on end of the gyroscope axis at a star, IM Pegasi, while in a polar orbit above the Earth.  Over the course of a year, scientists found the spin axis had changed about 6600 milliarcseconds.  Their findings confirm that the Earth’s mass and rotation had effected the orientation of the gyroscope’s axis and thus proving the predictions true.

The ingenuity of creating this experiment is a great example of human innovation, but the fact Einstein derived at such finite detail through theoretical science provides further proof that he was the greatest mind in our history to date. (For those who doubted it)