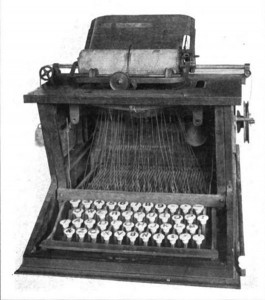 The typewriter, an invention that had transformed businesses and remained a staple for over 100 years is officially obsolete.  Godrej and Boyce in Mumbai, India has closed it’s doors after it’s annual production fell below 1000 units.  The company has cited that the most recent dip in sales resulted from Indian based businesses transferring over to computers.  The invention of the typewriter cannot be attributed to one person, it was an evolution of an idea carried out by several independent inventors who were often in competition with each other over several decades.  The first typewriter to be commercially successful was conceived in 1867 as a joint venture by C. Latham Sholes, Carlos Glidden, and Samuel W. Soule in Milwaukee, Wisconsin.  They in turn sold the patent to Densmore and Yost for $12000, who made an agreement with E. Remington and Sons to produce the machine in 1873.